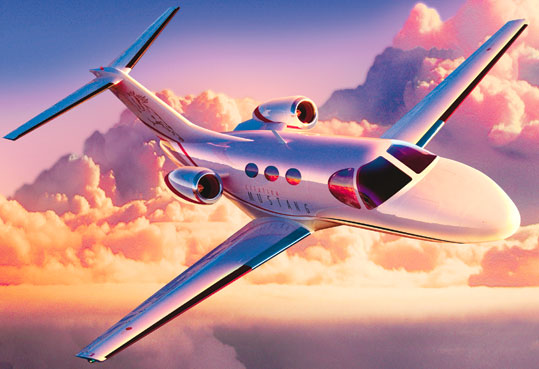 Rob McGrath loathes commercial airports. Too often, however, McGrath, the founder of Private Retreats, a company that manages vacation homes in beach and resort communities, finds himself passing through an airport—confronting the ubiquitous lines and delays—on his way from Southport, Conn., to one of his properties.

For shorter business flights or when the airports become too cumbersome, McGrath flies aboard his twin-turboprop Piaggio Avanti, hiring a pilot to fly it. However, the aircraft’s operating costs prevent McGrath from using it for a long-distance weekend getaway. “For $8,000, I’m not going to fly down to [North Carolina’s] Outer Banks for the weekend,” McGrath says. “Light jets today are still obscenely expensive. It’s tough to justify the [operating] costs. Even the Piaggio is still pretty expensive. It’s not the money, but it’s the concept of the money. I’m still price sensitive. I’m not a rock star.”

Two recent purchases—one for business, one for pleasure—promise to eliminate any such qualms from McGrath’s future travel plans. McGrath placed deposits on a pair of ProJets from Avocet Aircraft, one of six manufacturers building the next generation of light jets. The planes promise to shake the industry and possibly alter the framework of private travel. “I will probably buy more,” says McGrath. “This airplane can supply a hefty percentage of my needs. On short flights, it will replace the Piaggio. On flights over 1,500 miles, it will replace airline travel.” Avocet CEO David Tait, who developed the design concept of the ProJet, teamed up with Israel Aircraft Industries, a veteran aircraft manufacturer that will design, develop, certify, and produce the aircraft. “We think there’s a huge market out there,” Tait says. “Everything is converging to make this a viable product.”

McGrath, along with thousands of other buyers who have already placed deposits on their light jets, will not be able to fly in his aircraft for a while: Avocet does not expect to start delivering its planes until 2007, and the FAA has yet to certify any of the new light jets. However, owners are making the extraordinary decision to purchase the jets flight unflown and sight unseen because their manufacturers pledge improvements in speed, reliability, operating costs, and comfort over existing turboprops, at affordable prices. Furthermore, for some owners, the operating costs of light jets may be low enough to eliminate commercial travel altogether. With prices ranging from less than $1 million to almost $3 million, the jets are positioned close to top-of-the-line piston twins (a Beechcraft King Air C90B costs approximately $3 million) but below today’s least expensive business aircraft (an entry-level Cessna Citation CJ1 costs approximately $4 million).

Customer demand is one reason why manufacturers are sprinting to complete their jets. Technology is another. “Jet engines are coming on the market that are small, less expensive, and fuel efficient,” explains Robert Stangarone, vice president of marketing at Safire Aircraft, which is developing the Safire Jet for 2006. “And computer technology has made the cockpit instrumentation simpler, more user-friendly, and easier to acquire and maintain.”

The six light jets in development will have pressurized cabins, cruising speeds of from 350 mph to 450 mph, and ranges of more than 1,000 miles when flying as high as 41,000 feet, a level well above troublesome weather and air traffic. (Conversely, a Socata TBM 700 turboprop, for example, cruises at 280 mph and has a maximum ceiling of 30,000 feet.) They will feature the latest in cockpit instrumentation, with glass-panel navigation and weather displays. Except for the Diamond D-Jet (the single-engine aircraft has five seats and is limited to 25,000 feet), they will be equipped with two engines and accommodate four passengers and two pilots. Because these planes will be able to take off and land on relatively short runways, hundreds of local airports across the nation will be accessible. Also, a light jet’s operating costs will be less expensive because it will arrive at its destination faster than a turboprop while consuming a similar amount of fuel per hour.

If price is a primary consideration, then the advantage among light jets goes to Diamond Aircraft, which is building the single-engine D-Jet. The base price is projected to be $850,000. While its limited ceiling and slower speed are drawbacks, the D-Jet will be able to take off and land on a 2,500-foot runway, enabling it to fly in and out of locations that its competitors might not be able to access.

Adam Aircraft’s A700 will be the first of the light jets that owners can park in their hangars; upon FAA certification, owner delivery is scheduled for later this year. The plane also has the most distinctive appearance, with an all-composite structure and twin-boom tail. “Our carbon fiber construction is much lighter, much stronger, and allows us to build a more aerodynamic airplane,” says CEO George Adam Jr. “It gives us a tremendous edge.”

Safire Aircraft’s Stangarone expects multiple markets to develop: owner/operators who already know the value of personal aircraft, frustrated airline travelers who would gladly switch to a small-jet air-taxi system, and corporate flight departments looking to replace their existing jets or to provide additional flight hours. Stangarone says that of the 286 orders his company has received (as of October 2003), approximately 90 percent are from owner/operators. But he expects that, over time, the ratio will flip, and 90 percent of his orders will come from fleet operators and corporate flight departments. “Those buyers are more conservative and typically wait to make commitments,” Stangarone says. “It’s a little early for them.”

Of the 2,000 orders placed for Eclipse Aviation’s Eclipse 500, about one-third are from owner/operators. Eclipse CEO Vern Raburn calls the buyers “early adopters”: adventurous entrepreneurs and business owners who are comfortable being first in line to try new technologies.

David Marco, owner of Marco Ophthalmic, a Florida company that manufactures and distributes ophthalmic diagnostic products, fits this description. Marco, who also owns a Cessna Conquest and a P-51 Mustang, ordered a Cessna Citation Mustang, which is scheduled for 2008 delivery. “I grew up in aviation, in a flying family,” says Marco, who predicts that he will fly some 200 hours in the new Mustang, 95 percent for business. “We’ve always used airplanes in our business, starting out with Bonanzas. We love to fly. I fly for business but for fun, too.”

Cessna made perhaps the largest splash in the burgeoning market in late 2002, when the aviation giant launched the six-seat Mustang. Within 48 hours of its introduction, Cessna received 217 orders, making the Mustang the fastest-selling new jet in company history. “It was pretty phenomenal,” says Mark Paolucci, vice president of Citation sales. “It was more fun than we could stand.”

In terms of sales, the Mustang and the four other jets must play catch-up with the Eclipse 500, which has captured the bulk of the market share. However, Eclipse suffered a major setback in November 2002 when it severed ties with Williams International, the supplier of the jet’s EJ22 engine. Last February, the company signed an agreement with Pratt & Whitney Canada to build its engines.

The switch in engine suppliers set delivery back two years to 2006, but the delay did not stop Randy Witt, a private pilot who has been flying for 14 years, from placing his deposit. Witt, a Kansas City resident who flies his Beechcraft Baron about 300 hours a year (80 percent for personal travel and 20 percent for business), expects to fly similar missions in his Eclipse 500. “I can go twice as fast and twice as high,” says Witt. “These capabilities have never been offered before at anywhere near this price point. It’s just earth-shattering what Eclipse has created.”

See “Timepieces for the Private Aviator.”

See “Flagging Down a Flier.”

Although companies such as Sino Swearingen, Aviation Technology Group, and VisionAire are also developing new light jets (even Honda is rumored to be working on an aircraft), there are six major players scheduled to release aircraft featuring similar specifications and performance capabilities: